The Paradox of Start-Up Versus Scale-Up

Successful companies in the age of digital revolution are customer obsessed, consider failure the path to success, think long-term, and pursue operational excellence.

Mortality is a topic that gets a lot of coverage when it has to do with humans, may be not enough when it comes to businesses, especially successful and large businesses. When I think about them, I am reminded of the quote “The idea is to die young as late as possible” – By Ashley Montagu – A British-American anthropologist.

The fountain of youth is germane to the characteristics of a startup as well as the ones that have transformed to address the digital revolution. Successful companies in the age of digital revolution have to be nimble while operating at a scale.

The failure rate of start-ups and the inability of the large companies to adapt and survive is well documented. The traditional business models have typically forced the thinking to an either-or scenario between start-up and scale companies. A quick look at the list of fortune companies over the last 15 years will give you an idea of how difficult these companies find to adapt.

Companies that can achieve both are going to become dominant players and can delay the inevitable mortality. Few companies from both ends of the spectrum have made it and created a model to thrive in this age. The questions, Why, and can you do something about it, are of interest to me.

Here is a quick review on the performance of large companies in Dow Jones and Unicorns.

Let us look at the illustration below that has the value and rate of return for all the Dow Jones companies excluding Apple and Microsoft. Looking at the range of returns from negative 100% to 700% on X-Axis, and negative $100 to $300 Billion dollars on Y-Axis, you can see only two companies have a 300% plus return with at least $100 Billion in value over the 10 years, Home Depot and Visa.

J.P.Morgan and Johnson & Johnson have performed relatively well with higher value creation, though the rate of return over a 10 year period is in the normal range. I also would never have predicted General Electric to be the worst performing during this time.

Now let us look at the second illustration with all Dow Jones companies including Apple and Microsoft, along with Google, Facebook and Amazon.

All of the companies, excluding Microsoft, Google, Facebook, Apple, and Amazon are in a low performing quadrant relatively. The consolidated Unicorn exits (992%, $719 Billion) will also be in the same quadrant with Amazon.
What are these Unicorn companies and Amazon doing differently?
Ask the question, and I bet you will hear the buzz words “ Innovation“, “Transformation“, & “Change“. But what do these words really mean? How are the companies making these a reality?
Fortunately for us, the culture of Amazon is relatively well documented and is something we can and should learn from. The shareholder letters from Bezos reveal a wealth of information and insight about Amazon’s principles underlying their culture.
Customer Obsession rather than competitor obsession
Are you just working to satisfy your customers or also trying to invent for them by anticipating their needs?
Eagerness to invent and pioneer
Are your decisions just high quality or is it also high velocity?
Willingness to Fail & Making Bold Bets
Do you have a culture of tolerating failures and betting on lower probability of success with bold payoffs?
Long-term thinking
Are you focused on short term results or invested in the long term principles?
Operational Excellence
Are you nurturing high standards in your organization or tolerating low standards?
Final Thoughts
I believe Bezos gets this and here is his signature line from every shareholder letter since 1998 – “As always, I attach a copy of our original 1997 letter. Our approach remains the same, because it’s still Day 1”.
I will leave you with a quote (Illustration 3) from him during an all-hands call and subsequently published in last year’s letter to the shareholders. He goes on to say that established companies might harvest “Day 2” for decades, but the final result would still come.
The history of business world is littered with examples of mortality. The “Day 1” mindset coupled with the wisdom of mature companies to scale the operations successfully has helped Amazon evolve, adapt, thrive and dominate in the current landscape. 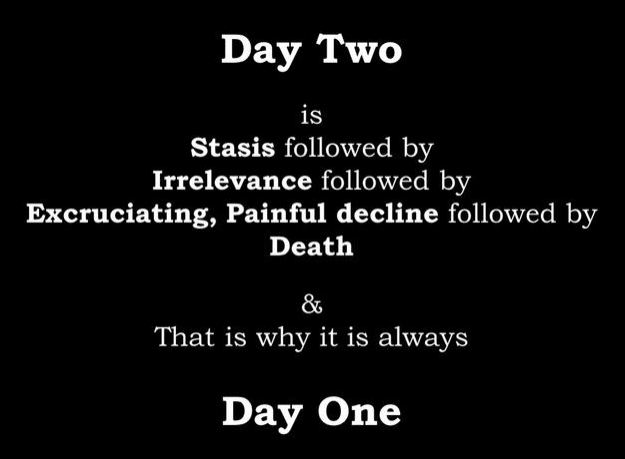 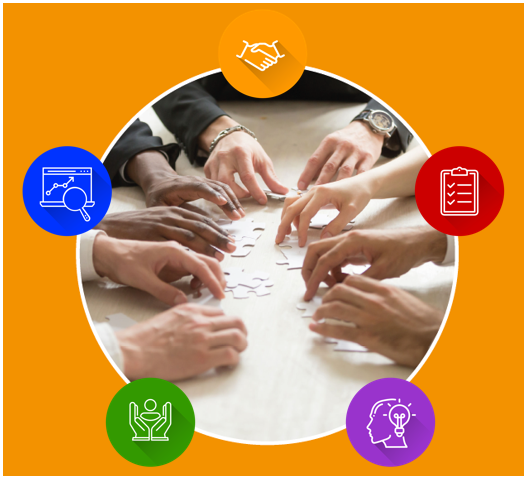 Book
Easy to use assessment for leaders, teams and individuals written by Avik Roy and Pat Sanaghan. A great tool for teams who want to take their performance to the next level. 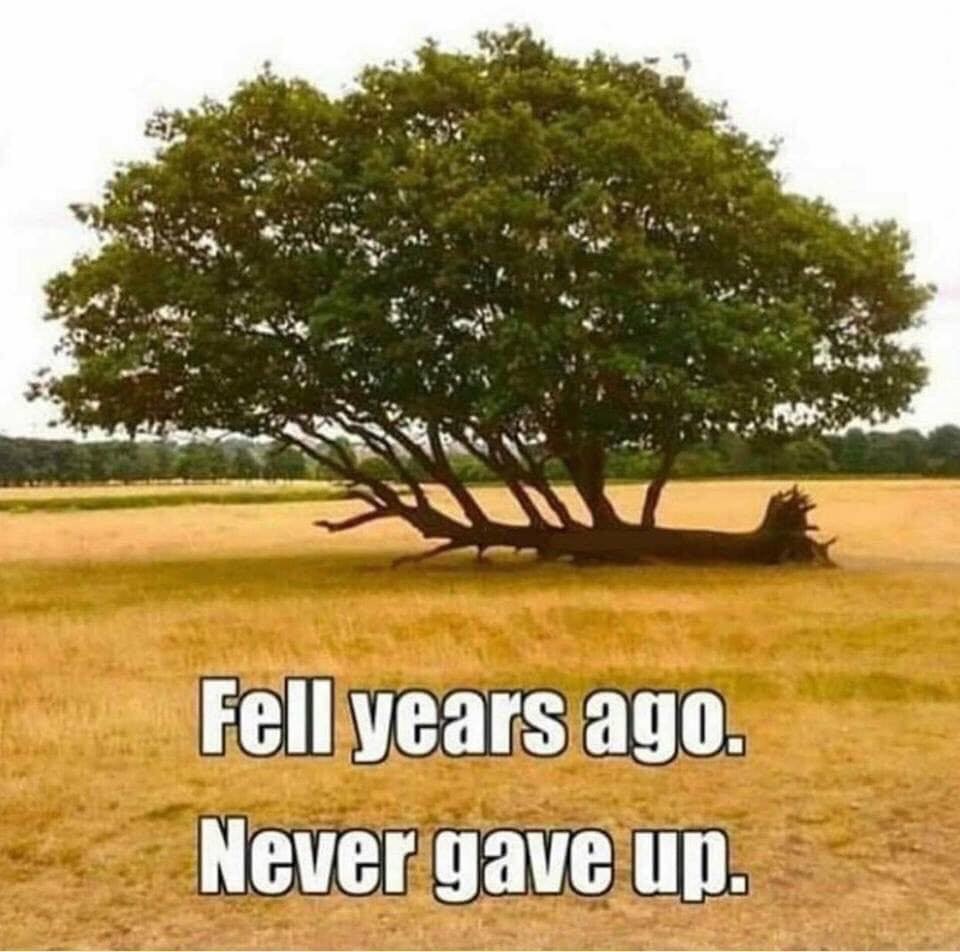 Crisis is an opportunity for every leader. No exceptions.

Article
We all need to take the time to step back, think strategically, and put plans into place that will give us an edge, no matter what the future holds. 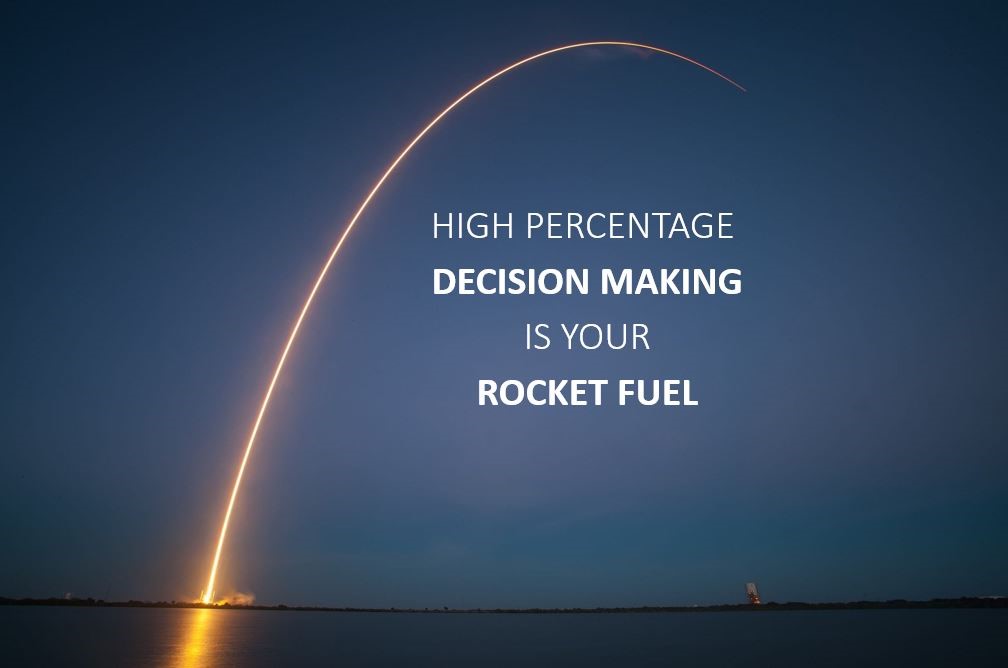 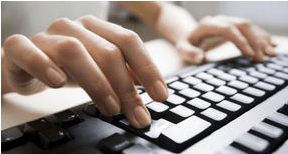 2 Secrets To Ace Your Business Decision Every Time 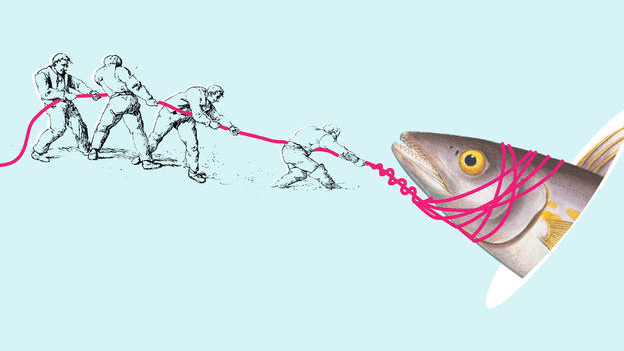 Not Solving Problems Effectively? What May Be Missing From Your Team