We are all in crisis mode, but we still need to take the time to step back, thing strategically, and put plans into place that will give us an edge, no matter what the future holds.

Set SMART goals to make sure everyone is clear and aligned. 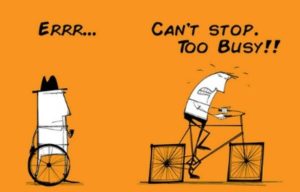 A friend of mine is the quintessential traveling minstrel of the business world. She’s a highly paid consultant, always on the road.
Every Monday morning, she grabs her tall cup of coffee and travels to another distant client location. From coast to shining coast.
During the work week, she rises every morning in her hotel room. She dances all day to her client’s tune. And tucks herself into a different bed every week.
She returns to her life and her family Thursday nights. Exhausted. Physically, intellectually, emotionally.
Spiritually, she says she is frayed. And fraying a wee bit faster every week. She knows this is not what she wants out of life.
The money is good. She’s respected in her field. Her clients appreciate her work. Her colleagues value her knowledge and skills.
She recently said to me, “I would love to figure out what I really want to do with the rest of my life. And then do it. But I simply don’t have the time.”
She continued, “When I am not on the road, I am either busy catching up on life’s other backlogs, or too tired to think. The days and weeks just buzz by. Sometimes I feel guilty. Sometimes sad.” 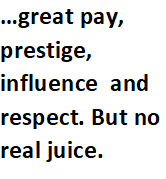 I listened. I understood. Many of us have been in my friend’s shoes. At several pivotal points during the course of an eclectic career, my work life too has pulled away in directions that just didn’t feel right.
Like the time I was Chief Of Staff for a senior R&D executive at a top-10 life sciences company. My boss was running a 3,000 person organization with a budget of over a billion.
I enjoyed great pay, prestige, influence  and respect. But no real juice. Just like my consultant friend.
My brain was racing. How can I help her? I’ve been in her situation before. What worked for me? Then it came to me in a flash.
“You need to schedule an appointment” I found myself saying.
“With who?” she asked.
“With the most important person in the world.”
Silence.
“Hmmm. Who might that be?” she asked weakly, likely wondering if it had been a wise idea to share her dilemma with me.
“YOU” I replied. “In this situation, is there any other person more important?”
That question, luckily for me, brought it home. Suddenly, all at once, she grasped the point. It all fell into place. I didn’t have to say more.
Now that she understood, we brainstormed the next 10 minutes and came up with a few ways to do it right. And make it stick. 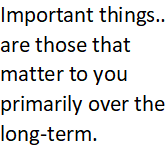 But what is “important”?  Important things, in this context, are those that matter to you primarily over the long-term. They yield little to no tangible benefits over the short-term.
If you want to learn more about this notion of important vs urgent, read Chapter 3 of author Stephen Covey book, The Seven Habits Of Highly Effective People.
That chapter is titled Put First Things First. It presents a nifty two-by-two matrix, where “important but not urgent” sits in Quadrant 2. My colleagues and I at work use “Quadrant 2” as a shorthand to refocus, if we are veering off too much into the other quadrants.
Professionally, my consultant friend was spending 100% of her time in those other three quadrants. Neglecting Quadrant 2. I pointed this out to her. And asked if she felt her need deeply enough to elevate it to Quadrant 2. She said she did.

Zero In on the Best Times

Finding optimal times to do something makes it a lot easier to get done. Like driving to work before or after rush hour. Or taking advantage of your body’s natural rhythms to do creative work early in the morning. Or late at night.
I asked my friend, “What’s best for you? How about on the flight out to your client location at the top of the week? Fresh after the weekend, with none of the office interruptions.”
She mumbled something that sounded like encouragement for me to go on.
So I did, “Could you maybe fit this thinking time into the quiet moments of a weekend morning?  Maybe even during a head clearing walk in the middle of a not-so-crazy consulting day?”
My friend’s enthusiasm on the rise, she said, “For the first time I feel I might be able to actually do it.”
Just for good measure, I forwarded her a little video I had come across of simple time hacks.  “7 Time-saving Hacks That Will Free Up Hours In Your Schedule” by Rob Ludacer and Chris Weller.

Will power is like a muscle. It is folly to pick up the 20lb weight in the gym before first gaining some traction with the 5lb weight. And so on…

When we start small, we make it easier to fight off resistance. And excuses. And fatigue. It get us to the small wins. Those that build the will power muscle. Gives us that little dopamine hit. Bolsters or confidence to do a wee bit more.
Make it so small at first, I told my friend, that you simply can’t say no to yourself. In the beginning, treat it like a meeting with your boss. Or your chief client.
“How about 15 minutes of “me time”? Too much? 10? You can surely do 5. Just a little nudge-to-self note marked on your calendar.”
“Later on, after you’ve done a few, they can be planned, spontaneous, or a combination of both,” I continued.
“I never looked at it that way,” she replied. “Makes it sound a lot less daunting. Quite the opposite of how I’ve always thought about it.”
I suggested my friend take a peek at Theresa Amabile and Steven Kramer’s book, The Progress Principle: Using Small Wins to Ignite Joy, Engagement and Creativity at Work. Their research at Harvard illustrating the power of small, incremental progress.

You may have heard the old English saying, “Mighty oaks from little acorns grow”.  Likewise, small wins often generate the fuel needed for bigger successes: Confidence and learning.
A key ingredient is the elusive “can do” mindset, which is often quick to flee if you try to “go big” too quickly. And run into walls. Especially when you set your sights on something that lives in Covey’s Quadrant 2.  In other words, something important that’s not urgent.
To my friend, I said, channeling Schumacher, “Small is beautiful. Eventually big may be better. But build only when you’ve laid a solid foundation.”
“I am not sure I understand”, she said hesitantly.
“Stick with the smallest increment of time you’re comfortable starting with,” I said, “until you feel confident you can easily schedule longer meetings with yourself.”
After doing it a few times, it will be quite easy to ratchet up from 5 minutes to 10. Or from 10 to 15.
To carve out a big chunk of time with yourself right at the outset could well unleash spontaneous excuses to not do it again.

Make it a Habit

Habits gain our attention only after they are well formed. Like a rope already well tangled. And bad habits somehow are all we seem to be able to notice. But good habits can be engineered.
Socrates made just that point, positing that “We are what we repeatedly do. Excellence then, is not an act, but a habit.”
Charles Duhigg in the book The Power Of Habit – Why We Do What We Do in Life and Business speaks to a consistent neurological pattern that governs all habits. It consists of three elements: Cue, Habit, and Reward. 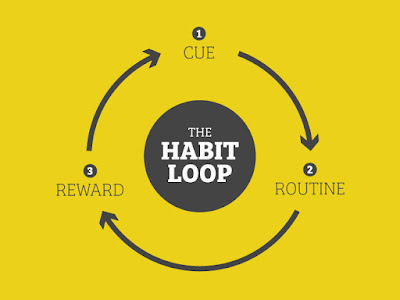 The habit loop starts with a Cue. In essence, a trigger that prompts your brain to choose which habit to use and activate it. The Habit is always a physical, mental or emotional routine. Or some combination thereof. Finally, the Reward reinforce the pattern.
“To understand how habits work is to learn the secret recipe of how to build them the way you want,” I offered.
“You have the biggest building blocks already in place,” I continued, “strong motivation and belief.”
My friend’s challenge, quite obviously, was execution. So I suggested, “find the patterns that you like best when you’re doing it in small increments. Things like place, time of day, what you do before and after.
These are called behavior chains. They are essential to automating execution in the brain.
“And minimize choices as much as possible. Fewer options is always better for habit making.”

Finally, I asked, “as you discover you’re pulling off longer meetings with yourself, how will you figure out the sweet spot?”
“That’s a bridge too far, right now”, she replied wistfully.
Christine Carter, PhD, the authority on the topic, and the author of the book, The Sweet Spot – How to Find Your Groove at Home and Work, defines the sweet spot as “that place where your greatest strengths and your greatest personal power overlap with those arenas where you find ease, where there is little resistance or stress.”
I had given my friend a lot to process. I don’t speak to her that often, so this was my only chance to share all the pieces I thought she needed.
So I closed out the topic by asking her to just be mindful of the sweet spot.
We switched to other topics. Family. Empty nest. Politics. Then it was time for her to hustle off to her gate. Yet another six hour  flight to get to work.
Secretly, I wished she’d carve out a few minutes for a brief initial meeting with the most important person in her world.
EPC